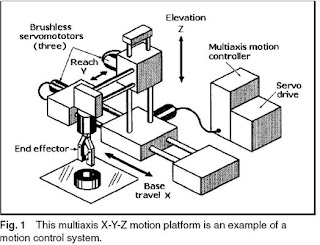 A modern motion control system typically consists of a motion controller, a motor drive or amplifier, an electric motor, and feedback sensors. The system might also contain other components such as one or more belt-, ballscrew-, or leadscrew-driven linear guides or axis stages. A motion controller today can be a standalone programmable controller, a personal computer containing a motion control card, or a programmable logic controller (PLC).
All of the components of a motion control system must work together seamlessly to perform their assigned functions. Their selection must be based on both engineering and economic considerations. Figure 1 illustrates a typical multiaxis X-Y-Z motion platform that includes the three linear axes required to move a load, tool, or end effector precisely through three degrees of freedom. With additional mechanical or electromechanical components on each axis, rotation about the three axes can provide up to six degrees of freedom, as shown in Fig. 2.

Merits of Electric Systems
Most motion control systems today are powered by electric motors rather than hydraulic or pneumatic motors or actuators because of the many benefits they offer:
• More precise load or tool positioning, resulting in fewer product or process defects and lower material costs.
• Quicker changeovers for higher flexibility and easier product customizing.
• Increased throughput for higher efficiency and capacity.
• Simpler system design for easier installation, programming, and training.
• Lower downtime and maintenance costs.
• Cleaner, quieter operation without oil or air leakage.
Electric-powered motion control systems do not require pumps or air compressors, and they do not have hoses or piping that can leak hydraulic fluids or air. This discussion of motion control is limited to electric-powered systems.
Motion Control Classification
Motion control systems can be classified as open-loop or closed loop. An open-loop system does not require that measurements of any output variables be made to produce error-correcting signals; by contrast, a closed-loop system requires one or more feedback sensors that measure and respond to errors in output variables.
Closed-Loop System
A closed-loop motion control system, as shown in block diagram Fig. 3, has one or more feedback loops that continuously compare the system’s response with input commands or settings to correct errors in motor and/or load speed, load position, or motor torque. Feedback sensors provide the electronic signals for correcting deviations from the desired input commands. Closed loop systems are also called servo systems. Each motor in a servo system requires its own feedback sensors, typically encoders, resolvers, or tachometers that close loops around the motor and load. Variations in velocity, position, and torque are typically caused by variations in load conditions, but changes in ambient temperature and humidity can also affect load conditions.

A velocity control loop, as shown in block diagram Fig. 4, typically contains a tachometer that is able to detect changes in motor speed. This sensor produces error signals that are proportional to the positive or negative deviations of motor speed from its present value. These signals are sent to the motion controller so that it can compute a corrective signal for the amplifier to keep motor speed within those preset limits despite load changes.
Posted by Machine Designers at 7:51 AM